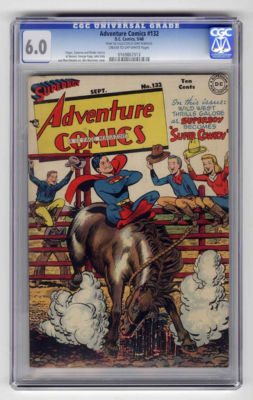 FROM THE JERRY ROBINSON COLLECTION

He was “the primary artist for the majority of the early appearances of Batman and the creator of such iconic villains as the Joker.

Robinson began his career as a comic book artist while studying journalism at Columbia University.

Robinson played a key role in the success of Batman, and was a central figure in the creation of Batman’s sidekick, Robin and worked on all the early issues featuring appearances of Catwoman, the Penguin and the Batmobile.

Robinson is ranked among the 100 greatest comic book artists of all time and many of his comic book covers are still considered classics.

He has been described by All Star Auctions as “a legend in the field and a real life Super Hero”.

Alongside the ink-on-board works, Robinson collected a number of copies of Batman 1-12, early Detective Comics, Superman and other key DC titles and Golden Age titles.

Assembled over 67 years, The Robinson Collection is described by All Star Auctions as “unique in its coverage of the nucleus and origins of comic books”.

We had the honor of acquiring Jerry's Comic Book Collection.

For more information about us, please see the "about me" page!

This website uses cookies to improve your experience while you navigate through the website. Out of these cookies, the cookies that are categorized as necessary are stored on your browser as they are essential for the working of basic functionalities of the website. We also use third-party cookies that help us analyze and understand how you use this website. These cookies will be stored in your browser only with your consent. You also have the option to opt-out of these cookies. But opting out of some of these cookies may have an effect on your browsing experience.
Necessary Always Enabled
Necessary cookies are absolutely essential for the website to function properly. This category only includes cookies that ensures basic functionalities and security features of the website. These cookies do not store any personal information.
Non-necessary
Any cookies that may not be particularly necessary for the website to function and is used specifically to collect user personal data via analytics, ads, other embedded contents are termed as non-necessary cookies. It is mandatory to procure user consent prior to running these cookies on your website.
SAVE & ACCEPT